27.02.2017 - 02.03.2017 - Meeting of representatives of refrigeration associations of Armenia, Kazakhstan, Kyrgyzstan, Moldova, Tajikistan, and Ukraine as well as working groups from Azerbaijan and Turkmenistan took place in Moscow

Since February 27 till March 2, 2017, a meeting of representatives of refrigeration associations of Armenia, Kazakhstan, Kyrgyzstan, Moldova, Tajikistan, and Ukraine as well as working groups from Azerbaijan and Turkmenistan took place in Moscow. It resulted in establishing the Interstate technical committee which will help specialists in refrigeration solve their common problems. Read more 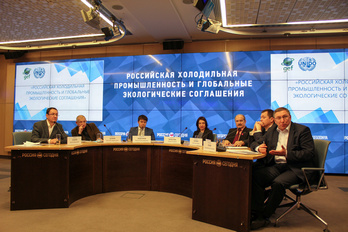 The press-conference covered changes to Russian and international legislation on protection of the ozone layer and climate. Read more

10.12.2015 - Implementation Results of UNIDO/GEF-MNRE Project “Phase Out of HCFCs and Promotion of HFC-Free Energy Efficient Refrigeration and Air-Conditioning Systems in the Russian Federation Through Technology Transfer” 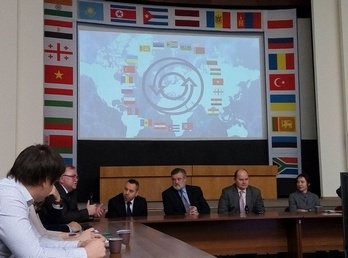 On December 10, 2015, the Moscow headquarters of the International Centre for Scientific and Technical Information hosted conference “Implementation Results of UNIDO/GEF-MNRE Project “Phase Out of HCFCs and Promotion of HFC-Free Energy Efficient Refrigeration and Air-Conditioning Systems in the Russian Federation Through Technology Transfer” and the 8th meeting of the Steering Committee of the Project. Read more 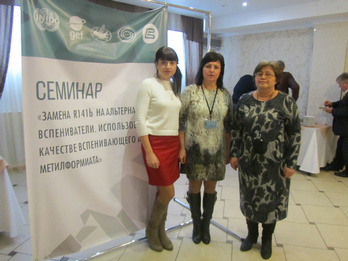 On November 25–26, 2015, Vladimir hosted a workshop on use of methyl formate (MF) as a PU foaming agent. Read more 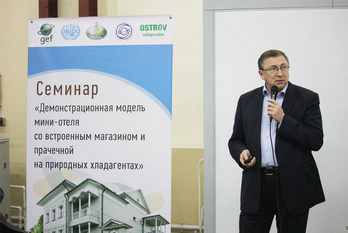 In November 2015, three groups of specialists were trained at the training center of Ostrov-Komplekt, Mytischy, Moscow region. The training in the form of workshops was a part of UNIDO/GEF/MNRE of Russia project “Phase out of HCFCs and Promotion of HFC-Free Energy Efficient Refrigeration and Air-conditioning Systems in the Russian Federation through Technology Transfer”. During implementation of the Project, specialists of Ostrov created a working model of a hydrocarbon system for heat and refrigeration supply of a typical mini hotel with a shop and laundry. Read more 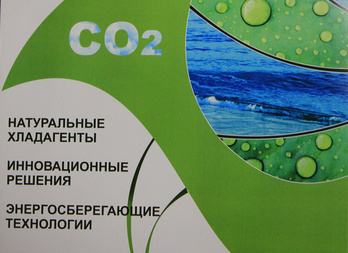 On October 21–22, 2-day workshop “Training of production engineers for enterprises engaged in production of PU preinsulated pipes” was held in Moscow and Peresvet, Moscow region, as part of implementation of UNIDO/GEF-MNRE Project on ODS phase-out in the Russian Federation. The workshop was organized by the Union of Eco-Friendly PU Product Manufacturers and Consumers with support of the Association of Preinsulated Pipe Manufacturers and Consumers. Read more

On October 2, 2015, the UNIDO/GEF-MNRE Project on ozone-depleting substances, hydrofluorocarbons, phase-out in the Russian Federation was presented at Scientific and Technologies Information, Statistics and Information: National Experience and International Cooperation workshop organized as part of International Techmart Vietnam 2015 exhibition in Hanoi, Vietnam. Read more

16.09.2015 - Workshop on ozone-safe foam technologies on the International Day for the Preservation of the Ozone Layer 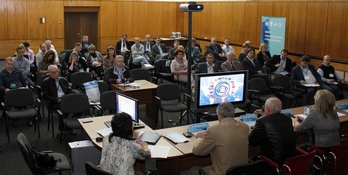 On September 16, 2015, the International day for the preservation of the ozone layer, joint workshop “Ozone-safe technologies for the foam sector” took place in Moscow. The workshop was organized by the Ministry of Natural Resources and Environment of the Russian Federation (MNRE), UNIDO, and International Centre for Scientific and Technical Information (ICSTI). Read more

05.08.2015 - Workshop “Disposal of ODS and ODS-containing equipment. Changes to legislation” 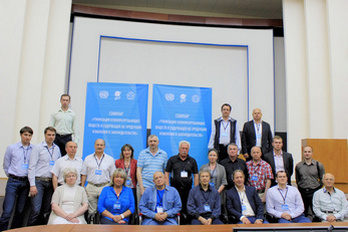 On August 5, 2015, workshop “Disposal of ODS and ODS-containing equipment. Changes to legislation” was held in Moscow. Read more 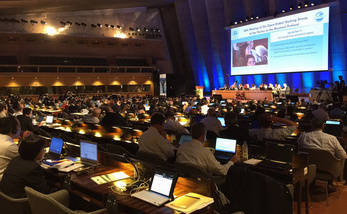 The thirty-sixth meeting of the Open-Ended Working Group (OEWG 36) of the Parties to the Montreal Protocol on Substances that Deplete the Ozone Layer reconvened on 20 July 2015, in Paris, France. Read more

15.07.2015 - The meeting of representatives of manufacturers and consumers of polyurethane (PU) products 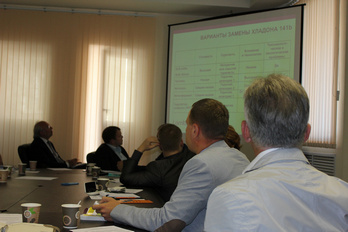 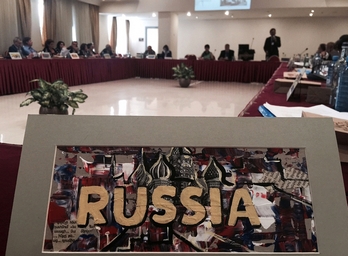 The Ministry of Nature Protection of Armenia and UNEP’s OzonAction Programme in cooperation with UNDP Armenia have jointly organized the annual meeting of the Regional Ozone Network for Europe & Central Asia (ECA Network) in Yerevan, Armenia, 26-28 May 2015. Read more 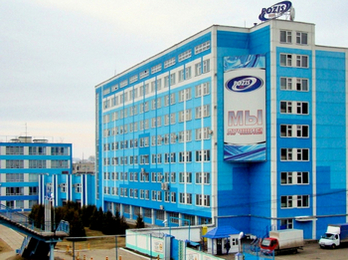 Supply, installation and commissioning of the process equipment for production of medical devices and domestic refrigerating appliances at OAP PO Sergo Plant (Zelenodolsk, Republic of Tatarstan) and domestic and commercial refrigerating equipment at OOO SEPO-ZEM (Saratov). The equipment was purchased at the expense of the Project funds. The enterprises are fully converted to use of an ozone-safe foaming agent for polyurethane insulation, i.e. cyclopentane. Read more

On April 28, 2015, the first draft of professional standard “Refrigerating, heat pump, and air-conditioning equipment technician” prepared by a working group comprising representatives of self-regulating associations NP ISZS-Montazh and NP ISZS-Proyekt, Association of Professionals in the Industry of Climate (APIC), Russian Union of Refrigeration Industry (ROSSOYUSKHOLODPROM), UNIDO Centre for International Industrial Cooperation in the Russian Federation and Professional training center—state independent educational institution of the city of Moscow, and other relevant organizations was discussed. Read more