Impact on human beings and environment

Carbon dioxide is A1 safety group: nontoxic (low-toxic), inflammable. In high concentration, CO2 is an asphyxiating gas. Carbon dioxide is heavier than air, so when leaked in closed premises it accumulates at the floor level.

Another risk consideration for CO2 is high working pressure, so to prevent accidents, safety valves and pressure switches are used.

Carbon dioxide’s ODP is zero, and its impact on climate is taken as a unit of global-warming potential (GWP). GWP of many traditional refrigerants—CFC, HCFC, HFC—is hundred and thousand times higher than that of CO2.

In industry, carbon dioxide is generated from stack gases or as a by-product of various chemical processes, e.g. decomposition of natural carbonates or production of alcoholic drinks.

CO2 can be a by-product of generating pure oxygen, nitrogen, and argon at air separation units.

Use of carbon dioxide

The refrigeration industry has been using carbon dioxide since the XIX century. According to the international nomenclature (R-numbering), CO2 is referred to as R-744.

Carbon dioxide has high thermal conductivity, relatively low viscosity, low critical point, and high triple point. The gas density ensures high heat transfer with air. The pressure loss in the pipeline almost does not influence the efficiency of cooling due to high working pressure. Due to the high volumetric capacity, CO2 systems are more compact.

At atmospheric pressure, carbon dioxide exists only in a solid or gaseous phase: it is called dry ice at temperatures below -78.4°C, and at higher temperatures evaporates.

At the triple point—at 5.2 bar and -56.6°C—carbon dioxide has three phases at equilibrium.

The critical point is at 31.1°C at 73.8 bar, and with temperature rise, carbon dioxide turns into a gas (supercriticality).

CO2 refrigeration cycle with a range of working temperatures and pressures below the critical point and above the triple point is a subcritical cycle. It is a standard refrigeration cycle of a vapor compression refrigerating machine where heat is transferred from a cooler body (medium) to a warmer one through the change in the refrigerant aggregate state accompanied by heat absorption or release.

CO2 refrigeration cycle with heat abstraction at temperatures above the critical one (31.1°C) and without condensing is a transcritical cycle. Since no condensation takes place, the heat exchanger where the refrigerant releases heat in the environment is not a condenser but a gas cooler. 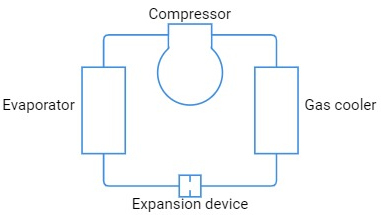 The basic plants are not fitted with pressure controls; they operate at optimum high pressure and maximum output under constant conditions.

In more complex systems, a thermal valve regulates the cooling temperature, and a low-pressure receiver compensates the load swing at the high-pressure side. Heat exchange in such systems is arranged between the compressor suction line and the gas cooler discharge line. 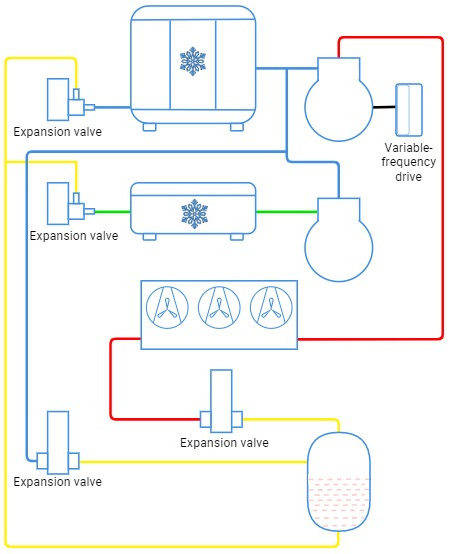 Transcritical booster system for commercial use

As separate plants, CO2 refrigerating plants operating only in the subcritical cycle are not widespread; they are used as low-temperature stages of cascade systems. The heat released during condensation of carbon dioxide is absorbed by the evaporating refrigerant of the high-temperature circuit (usually ammonia). Examples of NH3/CO2 systems are described in a separate section.

As a secondary refrigerant, carbon dioxide has the advantage of requiring a pump of smaller capacity, and high volatility, so absorption of latent heat in the consumer’s heat exchanger results in partial evaporation of CO2 already there.