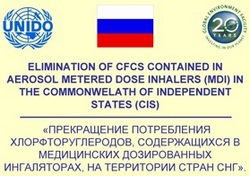 On October 4–5, 2011, in the building of the International Centre for Scientific and Technical Information, workshop «Elimination of CFC contained in aerosol metered dose inhalers (MDI) in the Commonwealth of Independent States» took place.

It was organized by the United Nations Industrial Development Organization (UNIDO) and the Global Environment Facility (GEF). The workshop was participated by 64 experts including representatives of such Russian ministries and agencies as the Ministry of Natural Resources and Environment, Ministry of Healthcare and Social Development, Federal Service on Surveillance in Healthcare and Social Development of the Russian Federation, Russian federal executive bodies, as well as those of Russian and foreign MDI manufacturers, ministries and pharmaceutical groups of CIS countries, UNIDO international and national experts and consultants.