On June 14, 2012, the Project Management Unit (PMU) of the UNIDO/GEF project for ODS phase out in the Russian Federation visited a household refrigerator and freezer destruction plant.

1. What is processed? The visit began with a friendly talk at the office. According to one of the enterprise’s top managers, USG plant located in Timelkam, a small Austrian provincial city, carries out destruction of refrigerators, freezers, washing machines, TV sets, and other electrical and electronic appliances as well as recovers refrigerants from air-conditioners. The plant’s estimated capacity is 320 thousand refrigerators per year which meets the number of devices annually handed over by citizens of Austria, a country of 8.5 mln people. There are 2 destruction plants in Austria engaged in processing of refrigerators from a number of other EC countries: Hungary, Czech Republic, Slovakia, Rumania, Greece, etc.

For information: commercial destruction of refrigeration equipment is also carried on in other parts of the world, such as Cuba. The Island of Freedom, which is not among the richest Latin-American countries, is currently implementing a state program for replacement of 2 million of old refrigerators with new ones.

Processed refrigerators are divided into several components: liquefied gases (refrigerants, heat insulation foaming agents), polyurethane crumb, steel, mixed scrap (aluminum, copper, plastics), and compressors. Except for gases, all those components are subsequently sold. The polyurethane crumb is purchased by agencies engaged in elimination of anthropogenic accidents or in construction of roads for use as an effective adsorbent for oil-product spills or as one of paving ingredients. At a German plant, USG’s partner, the scrap is divided to get granulated copper, aluminum, steel, and plastics. The liquefied gases undergo environmentally-safe combustion. The compressors are sold at a price of about € 950 per ton to certain of the countries of the Pacific Region for manual disassembling.

The refrigerator destruction is regulated by Directive 2002/95/EC on restriction of use of hazardous substances in electrical and electronic equipment and by Directive 2002/96/EC on promoting the collection and recycling of such equipment. In the summer of 2012, a new Regulation on wastes of electronic and electrical equipment will come into force after publication in the Official Journal of the European Community. By now its text has already been endorsed. Handling of ozone-depleting substances (ODS) is carried out in accordance with Regulation No. 1005/2009 on substances that deplete the ozone layer.

In addition to regulations and directives, European standard EN 50574:2012 also establishes requirements for the handling, transportation, storage, sorting and treatment of household appliances containing volatile fluorocarbons, hydrocarbons, or both. The standard, in particular, defines requirements for the destruction, specifies components the processed equipment should be divided into (in order to prevent excessive reduction of the process cost by means of loss of treatment quality), and describes monitoring requirements. To include the Standard into the regulatory framework, EC countries have 18 months. 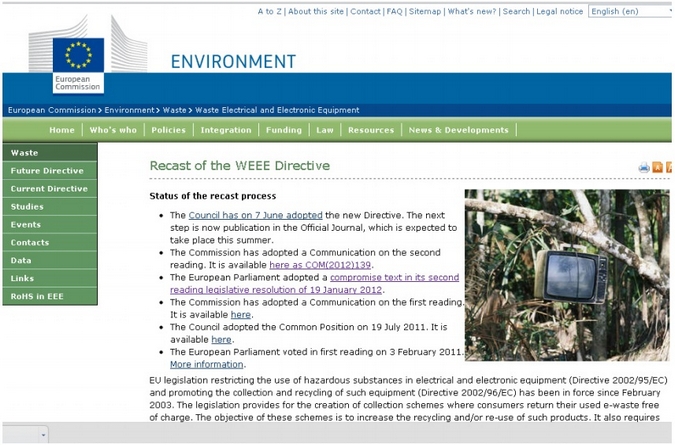 USG’s representative mentioned that it is the workflow when enactment of a law is followed by establishment of factories and plants—and not the reverse—that is necessary to pave the way for success.

The history of the plant started in 1990–1998 with recovery of ozone-depleting chlorofluorocarbons (CFC) from compressors. Since 1999 the plant has been recovering CFCs and, later, hydrochlorofluorocarbons (HCFC) from refrigerator and freezer insulation. That second stage of development was initiated within the framework of the European campaign for ODS phase out. At first, the plant received assistance of municipal services which task was to solve the problem of environmentally safe destruction of large-size household rubbish (refrigerators, washing and dish-washing machines, TV sets, gas and electric ranges). From the commissioning in 2003 till the visit, 1,277 thousand refrigerators were destructed at the plant. 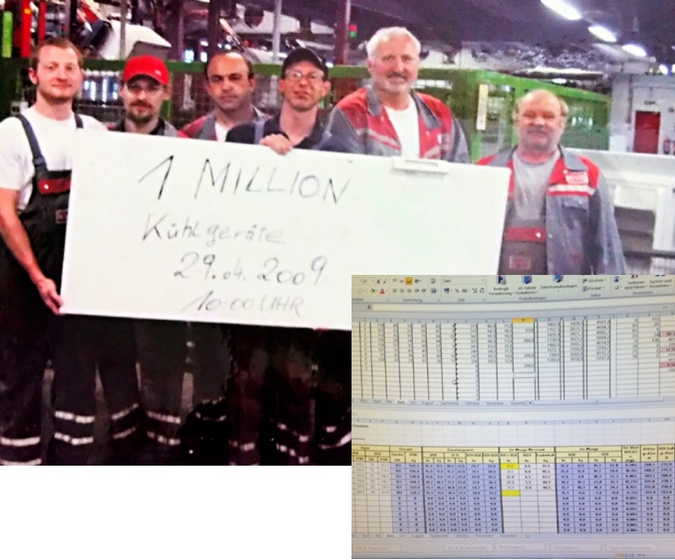 5. Who pays and how the work is done?

In Europe, destruction dues are paid by equipment manufacturers based on the number of appliances produced. There are 4 key players on the destruction market:

Retailers control the operation of the refrigerant equipment destruction system.

The destruction market is a free one. A customer addresses one or another facility depending on the destruction price offered. To regulate the quality of destruction, the self-check system and high penalties are used. If any destruction facility drops prices, market players get suspicious whether it is due to simplification of the destruction process or to deterioration of quality. Initiated checks may confirm the information obtained and lead to proper measures. At the same time, there are no restrictions for selection of a destruction technology; the only issues that matter are the result—that is the division of an appliance into certain components—and the absence of adverse effect on the environment. Thanks to the feedback, the system can efficiently index the amount of destruction dues depending on the market cost of materials obtained in the course of the destruction.

It should be noted that in the autumn of 2012 the Ministry of Industry and Trade of the Russian Federation imposes destruction fees for import of used cars. For now, indeed, the designation of the collected money and the environmental safety of the destruction process are not clear. 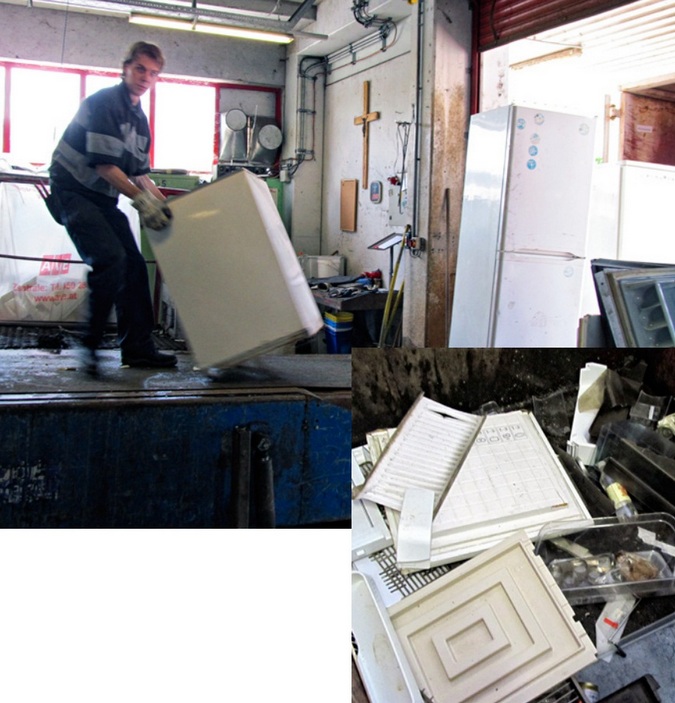 7. Main stages of processing of refrigerators and freezers at the plant 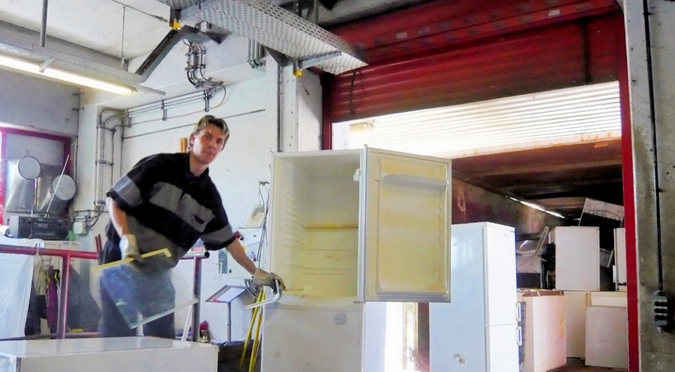 1. Inner detachable parts such as shelves, trays, glasses as well as power cables are removed from refrigerators. A unit is placed on the conveyor line to undergo all the cycle of destruction.

2. Oil-and-refrigerant mixture is recovered from the cooling loop. The refrigerant type is indicated on the compressor name plate. To ensure complete recovery of the refrigerant, the electromagnetic arm tilts the refrigerator at a certain angle. A special squeezer that ensures complete leak tightness perforates the cooling loop tube and the mixture is recovered due to the pressure differential: the line pressure is -1 bar and the loop pressure is about 1 bar. It is a manual operation followed by visual pressure check on the pressure gauge through the in-line viewport. The mixture is fractionated at about 90°C; the heating ensures efficiency of the fractionation. Then the gaseous refrigerant is compressed, liquefied and pumped into cylinders. The recovered freon is weighed on electronic scales; the estimated weigh is 120 gram per refrigerator. For information: for Mexico, the rate is 159 grams while for Russia, most probably, it will constitute 150 grams. 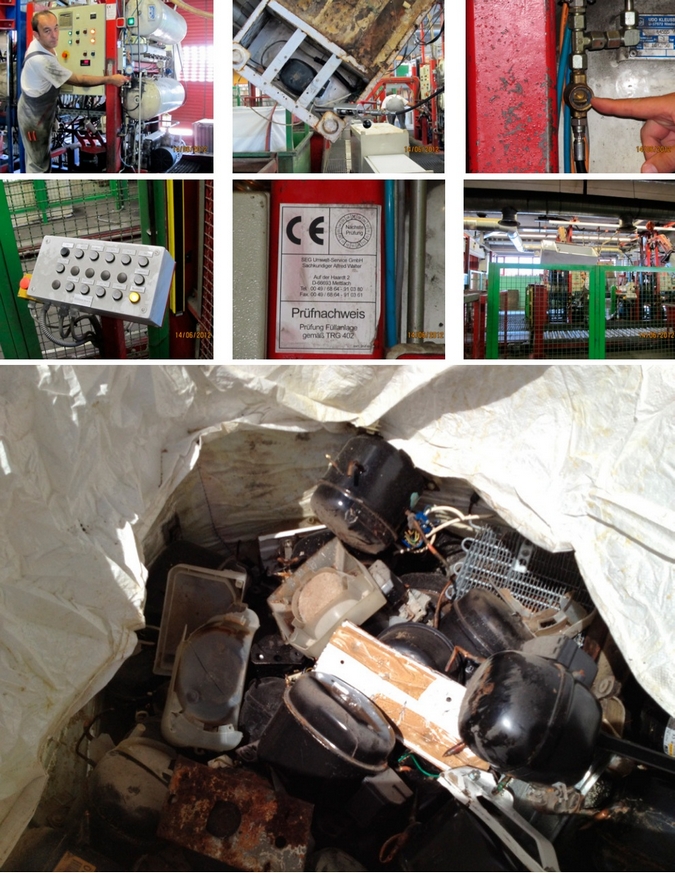 3. After breaking the system vacuum, hydraulic shears separate the compressor from the unit. As previously mentioned, compressors are accumulated in a special container and sold separately from other wastes. 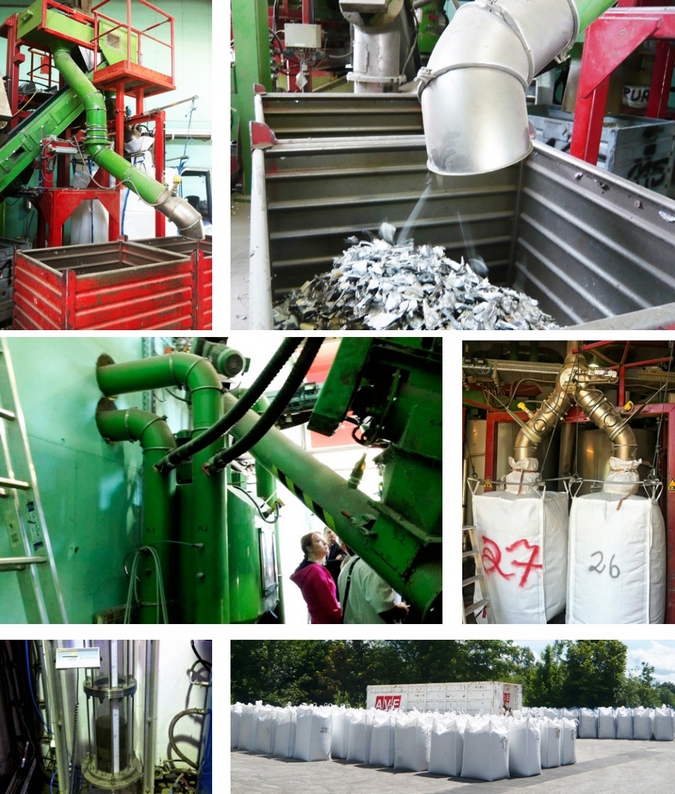 4. The refrigerator body is then crushed in a hermetical shredder where the complex fractionation system ensures its division into 4 components: polyurethane, steel (by means of an electromagnetic separator), mixed scrap (aluminum, copper, plastics), and gaseous foam agents (CFC-11, HCFC-141b, etc.). Gas recovery from polyurethane foam or degassing requires heating during 6–7 hours. The process requires the use of carbon absorbers with cooling-heating-cooling cycle. That makes it possible to extract up to 90% of gases from polyurethane foam; the minimum extraction rate for 1 kg of polyurethane is 76.5 g. The gases are liquefied by cooling and then poured out into standard 200 liter barrels. Solid wastes are collected in sacks for further processing and sale.

At the feeding on the conveyor line, types of refrigerators are determined basing on their nominal size or substances contained in insulation and cooling loop. The processing of refrigerators with glass wool insulation is limited with refrigerant recovery and compressor dismantling; the body is then sent to plants specializing in car destruction. The fully computerized system makes it possible to estimate the amount of substances obtained after destruction: how much these or those gas, scrap or compressors weigh. The input and output quantities must match. All the data are automatically entered into accounting tables to generate reports. 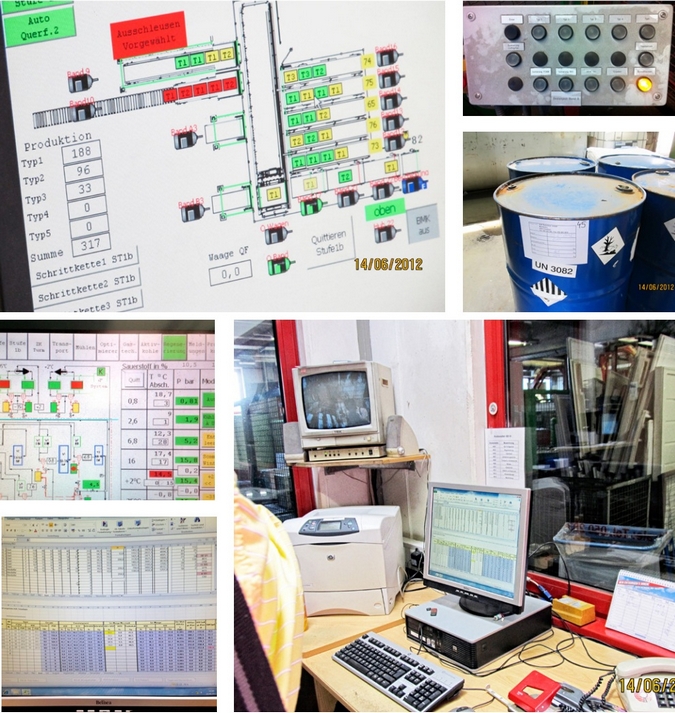 PMU expresses gratitude to the management of USG for the opportunity of getting to know the refrigeration equipment recuperation technology.